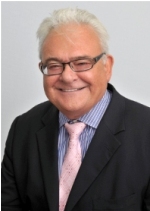 There is a direct correlation between the stage and grade of prostate cancer and the ratio of 12-lipoxygenase to 15-lipoxygenase-2 enzymes. Over expression of 12-lipoxygenase (12-LOX), and the metabolic product of its arachidonic acid substrate, 12(S)-HETE, shields tumor cells from apoptotic programs initiated, for example, by radiation therapy. This leads to selection and survival of 'radioresistant' cancer cells that contribute to morbidity and mortality. 12-LOX also imparts tumor resistance to anti-angiogenic agents. Inherent in the tumor cell 'survival' program is 12-LOX-mediated up-regulation of integrins, in particular αvβ3 and αvβ5, stimulation of endothelial cell migration, and enhanced angiogenic responses through the release of vascular endothelial growth factor. Activation of 12-LOX occurs in response to a variety of cytokines. Its activity is modulated by mobilization within the cell and subsequent physical interaction with the cytoplasmic tail of the β4 integrin, an integrin known to play a major role in the invasive process of numerous cancers. To date we have determined that 12-LOX and β4 integrin collaborate in carcinoma invasion in vitro and tumor progression in animal models by means of a complex cross talk of phosphorylation, protein trafficking, and transcriptional activation.

Advanced imaging technology is the bridge between biochemical data and mechanistic data generated from animal studies. The ability to track proteins at high resolution in real time under carefully controlled conditions is essential for defining precise contributions of temporal and physical redistribution of protein complexes within a cell, as well as cell movement and differentiation within 3D cultures and within tissues of live animals. Furthermore, the ability to perform such studies with reduced photo-damaging/cytotoxicity and on thicker specimens would allow for smaller specimen numbers and yield more clinically relevant data especially when imaging processes such as neovascularization in situ.